Until you know your stuff, the auction beat, though it appears attractive, can be treacherous territory.  What seem most attractive are the prices; one can expect to pay less at the auction than in a shop, although that is not always the case.  Many auction pitfalls are common knowledge:  all sales are finial, handlers cannily present the best aspects of an object while hiding its flaws; the lights, or lack of them, make even dreadful objects look well.  And not all bids at the auction come from people; on auctioneer claims to have no reserves, seems regularly to accept bids from the large clock in the back of the Elks hall.

In an entirely different sense, the clock is the greatest danger of auctions.  Prospective bidders have little time to examine the items that appeal to them; those in the know go to auction previews early and stay late.  Preview the lots as early as possible. At auction previews, take your time.  In order to be able to inspect each object thoroughly, inspect fewer of them.  Inspect only those lots that truly appeal to you and whose estimated prices (which may be cited in the catalogue or ascertained from the auctioneer) are within your budget and your own estimate of their value. 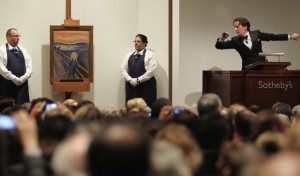 The estimated prices, educated guesses that can and very often do wander wide of the mark, are one of only two things the catalogue is good for.  None of those catalogue terms, “antique”, “rare”, “fine”, style-of”, “attributed to”, mean anything, although one can probably believe reproduction.  Catalogues descriptions don’t enter into the savvy collector’s consideration of any auction lot.  Why not?  Auction catalogues themselves, in their least perused section, state the reason.  The “Conditions of Sale”(printed to protect the house not the public) state:  Neither we nor the consignor make any representation or warranty, expressed or implied, as to the correctness of the description, genuineness, authenticity, or condition of eh said property.  No statement in the catalogue or at the sale shall be deemed such a warranty or representation or an assumption of liability with respect thereto.

In other words: Take no stock in anything said either in the catalogue or by the auctioneer.  Few auction houses have the same level of expertise and in-house experience as shops that handle antiques of similar quality. Nor need they.  They do not have the same investment in what they are selling.  Yet auction catalogues usually suggest some level of knowledge, claiming that “reasonable care” was taken in the cataloguing.  The phrase “reasonable care” means nothing, and doesn’t even insure that the auction house is telling all it knows about the lots.

Be especially suspicious of objects or collections that are sold shortly after being included in books or museum exhibitions. The selection of an object for a book or exhibit may not have been based on an unbiased assessment of that object but may have been merely hype for the auction.  Publication and exhibition are no guarantees of authenticity, and houses purposely make short periods between your receipt of an auction catalogue and the sale leaves you little time to adequately check cited publications, exhibits and histories.  You can’t always be in the know, but you can always be suspicious.

But the savvy collector is aware that sometimes an antique merely visits a museum on loan because it’s on its way to the auction block, even though most museum professionals successfully sidestep the hype-a-privately-owned-antique trap.  You not need to pay a premium for the imprint of an institution; you do not need it to assure that the antique is both genuine and worthy.

An antique on the market may have once belonged to a museum.  Ex-museum objects (euphemistically called “deaccessions”) are appearing ever more frequently on the auction block, and usually but not always, the catalogue proudly proclaims the museum connection.  The savvy collector asks why the lot is no longer in the museum.  Some reasons for museum DE accessioning (e.g., the object is one of many of its type in the collection, or it does not fall within he area of the museums interests) should not discourage interest on the part of the buyer.  If the table is not the best Chippendale two pedestal dining table in a museum, it may still be the best one available to the collector. If a hometown museum is not interested in an out-of-state chair, the collector may well be.

But museums also sell objects their curators have discovered to be fakes,, frauds or reproductions.  And museums sell objects that have been so overly restored that they cannot really be considered antique.  While inspecting a museum deaccessions, ask yourself, why it is being sold.

Be prepared for an exhilarating discovery, you have become such a savvy detective that you can spot the fake, the fraud, the reproduction, or the reworked antique that once fooled a curator.