Soluble resins Butvar B90 and Acryloid B72 are used as a consolidents in wood. Once deteriorated wood is soaked with the resin, the solvent flashes resulting in the solvents hardening thus filling missing or damaged cellular matrix-es. There is always a balance between high solids and lowering the concentration to get inter cellular penetration. Lower drying resins leads to lower strength values. There are several varieties of the above solvents, each can be chosen for its wood consolidate stiffness, thus matching the cellular wall stiffness of the species being mended. Issues of some consolidents are that they act as plasticizers, trapping solvent as curing begins thus weakening the stiffening process.

Concentration gradients of resin can have a two-fold effect on drying. First, with good liquid flow, fast drying may lead to migration of the solution to the surface resulting in a higher resin concentration at the surface. Second, if the liquid flow is slow, slow drying may lead to migration of resin into the specimens interior by diffusion. This would take place if partial evaporation from the surface layers leads to an increase in resin concentration, setting up a concentration gradient and subsequent diffusion of resin into the interior. Blotting of the surface results in gloss, whether it be from pores or loss area. Delivered resin is less effective in the interior than at the surface in improving bending strength.

Adding vacuum impregnation aids specimens receiving complete saturation. Thus, higher concentration solutions will deposit more resin and therefore impart more strength. However, for practical applications in which large objects or woods with low permeability are to be consolidated, full penetration is not easily obtained. Viscosity can be lowered by heating, possibly at the expense of undesired side effects. The choice of intervention must be tailored to specific requirements and condition of the object to be treated.

Vacuum impregnation can be achieved by two techniques; first by soaking the object in solution till saturation (turning object may be required to help avoid air pockets) and then vacuumed through a bag chamber, secondly a dish can be placed inside a desiccator (serving as a vacuum chamber). A dish with just solvent is placed inside, with the vacuum turned on the solvent (only) is sucked through the object, thus a solvent rich object will greatly increase the flow “open time” when the resin/solvent mixture is introduced. At the same time, this process tends to alleviate all air pockets in the object. At the end of the process air is introduced, almost as a plunger, pushing at the last of the resin filling the voids until drying occurs. A significant increase in stiffness for museum applications of display, where previous wood has been bacterially and oxidatively deteriorated. 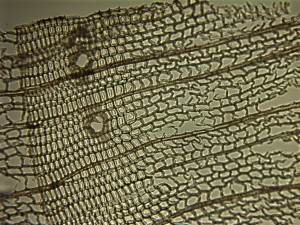 Permeability is a basic characteristic of wood determining the flow of fluids during the impregnation process. There are many factors, such as pore size, pit separation and other anatomical features; extractives; moisture content and specimens flow length which influence the permeability of wood. In general, permeability is higher in sapwood than in heartwood and it is much higher in the longitudinal than in the transverse direction. Pit structures in softwoods control the flow of fluid acting as valves. In heartwood the situation is more complex because of their more intricate structures. Solvent polarity and dissolved gasses also affect the flow into wood.

Thermosetting synthetic resins such as epoxy, polyester and methyl acrylate are chemically or irradiation curing synthetic polymers. This synthetic resin category has been commercially applied in the manufacture of wood-plastic composites, imparting strength and stiffness to underrated wood. Epoxy and methacrylate are used for consolidation of deteriorated wood, however these are not reversible. Also, epoxy treated wood may have an unsatisfactory aesthetic appearance and the heat developed in curing may lead to out-of-control rapid cure and damage to the object.

These polymers require too great amount of solvent in the reactions. With conservation reversibility treatment in mind, impregnation of soluble thermoset polymers becomes the most promising method.