Gregg Perry spent a year apprenticing under Patrick Blanchard, voted for over 10 years the Meilleur of France (“Best in France”). Blanchard has run the sculpting department at the world famous Ecolé Boulle for almost 2 decades. Perry divided his tenure by reproducing missing carved components which would come into the Ecolé Boulle’s studio from Versaille, the Louvre and other major French museum collections. He spent the balance of his time carving components for Patrick Blanchard’s personal clients throughout Europe. 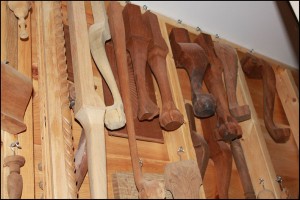 Today, the carving room in Perry’s studio boasts over 800 different shaped hand carving chisels with hundreds of working original models he has created. Missing components can be created from a photo, drawing and/or from researching Perry’s 3000 plus volume decorative arts library.